Order Everything, Compromised on Vinyl

​“Berry’s singer, Joey Lemon, motivated me to be fearless.” - Samantha Crain in SPIN Magazine
“Berry captures an offbeat and remarkably rewarding modern take on echo-chamber pop.” - Verbicide Magazine
​“Berry is an under-heralded band.” - Signal To Noise
“Prickly arrangements, deliciously enigmatic lyrics, gorgeously fragile melodies” Playback STL
“Affected, intricately-crafted songs. . . . I like the way these songs wander.” - Aiding & Abetting
“A new sound that is both fresh and classic at the same time . . . pop adventure at every turn.” - Chicago Deli Magazine                    “Gorgeous, haunting stuff . . .” Riverfront Times​
After several tours and bass players, Berry moved to Chicago in search of a city that would fit their quirky and idiosyncratic music. There, they began a recording frenzy, releasing a series of six EPs between 2007 and 2008. To promote these releases, the band embarked on a novel idea for a tour. Foregoing the usual cargo van or bus, Berry purchased a 30-day Amtrak pass and booked shows from Chicago to Seattle, relying entirely on the whims of public transport. Carrying a tiny tube amp in a rolling suitcase, a children’s drum set in a single kick drum case, and a full-sized keyboard on rollers, the band took an even more literal approach to their already minimalist styling.

​Exhausted by their Odyssey, Berry’s productivity hit a lull until close friend and bass player Shane Bordeau joined the band, revitalizing the group with a jolt of positive energy. Their next LP, Blue Sky, Raging Sun, was recorded and released in 2010 on Joyful Noise Recordings. This record took its inspiration from the Amtrak tour, juxtaposing scenes of epic natural beauty with the ennui of endless train rides where micro societies are formed by a handful of strangers riding coach.

Despite a devoted following, Blue Sky, Raging Sun saw limited commercial success, and the members of Berry spread out across the country, each pursuing separate professional opportunities. The next few years bore little fruit for Berry, but in 2014, they decided to record again, this time with few expectations about what might transpire. Gathering in a re-purposed pole barn in rural Kansas, the group picked up as if they had never dropped a beat. After writing and recording the skeletons of 11 songs in four days, the album fell into production limbo for more than two years until producer Paul Klimson (John Legend, Erykah Badu, Kirk Douglas of the Roots) offered his services to help complete the album.

The result is a stunning follow-up to Blue Sky, Raging Sun. The new LP, Everything, Compromised, was released on January 12, 2018 on Joyful Noise Recordings. Classic songwriting amidst Rubik's Cube structures -- the music of Berry is a curious hybrid. At once dense and delicate, their blend of forward-thinking indie-pop is as graceful as it is perplexing. In their decade and a half of playing together, Berry has found a way to marry meticulously detailed instrumentation with genuinely alluring pop. 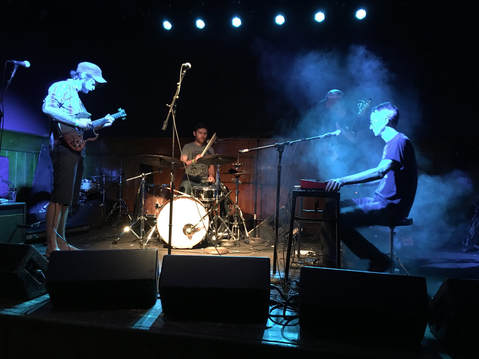